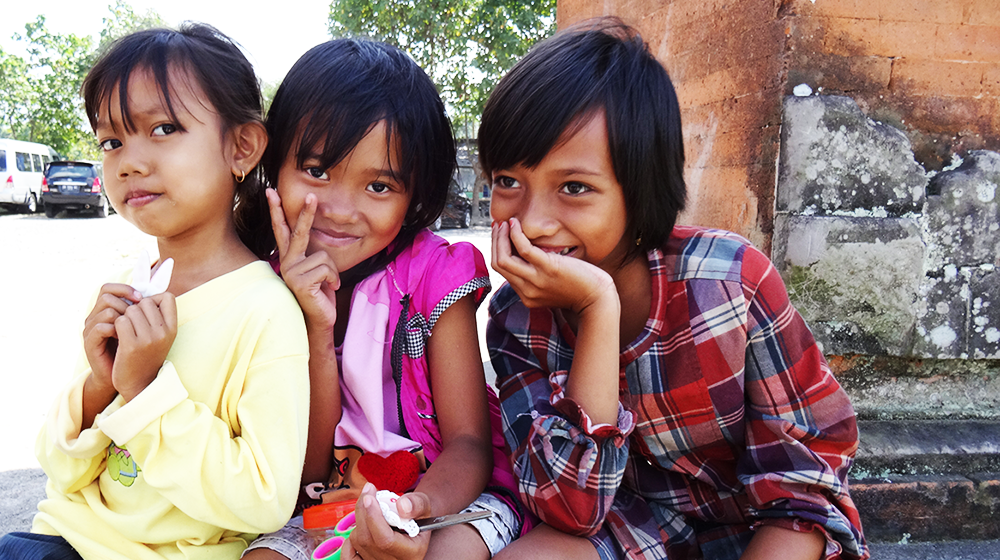 After a very bumpy boat ride from Bali to Lombok, we were very happy we did survive without throwing up. After a trip from Bali to Lombok by a huge boat and several stopovers in 2008 that took waaaay to long, we decided to choose the fast lane: speedboat yes! Not necessarily the safest way we figured, but let’s consider it an adventure and ignore the continuous “the boat kicks the water” bumps and the sounds of others vomiting. Ok! That was the sarcastic part! Lombok is gorgeous and completely different compared to Bali, Flores or Sulawesi. Let’s read what we think is great to do on Lombok!

Senggigi for us was nothing more than the place where we entered Lombok. The Hindu ceremony on our way from Senggigi to the province capital Mataram was provisionally our last interaction with Hinduism. We got used to the change of religion: on Lombok most of the people are muslim and we were lucky because Ramadan was about to end. That means Eid and a lot of noises from the mosques at not necessarily the most convenient times of day. Lots of sweets as well and we got to try cakes from the friendly host at our Airbnb accommodation. Milestone alert: In Mataram we made our first Airbnb reservation ever! We stayed at a large house, formerly owned by a Dutch couple and now owned by locals. 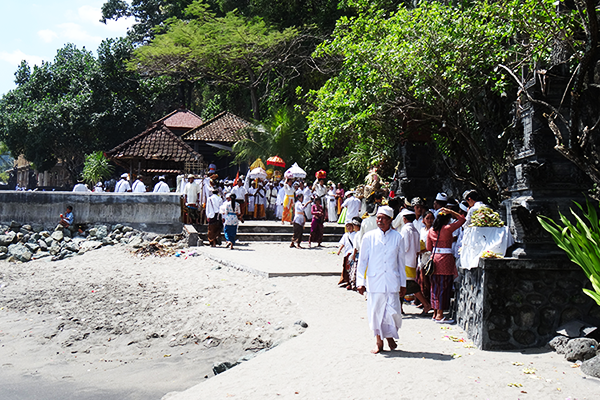 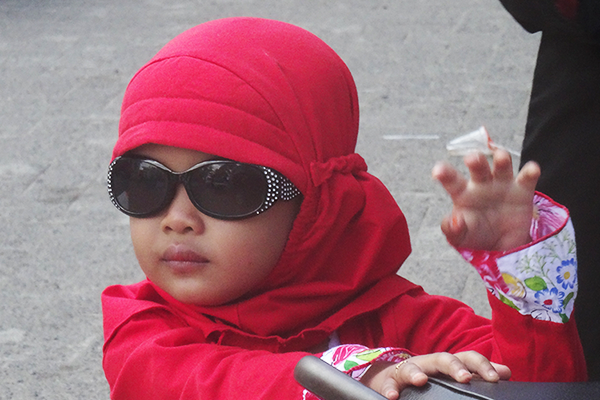 There is no need to stay more than 1 or 2 nights in Mataram. Just walk around and you will get a fairly good impression of the city. Important means of transport are motorbikes and horse and carriage. Yes, it is normal to replace horseshoes in the middle of the street. Another thing we did in Mataram was spending time in the malls, trying to discover the strangest thing to eat: pink, white and yellow gummy balls. No, we did not try them – they looked waaaay to chemical! 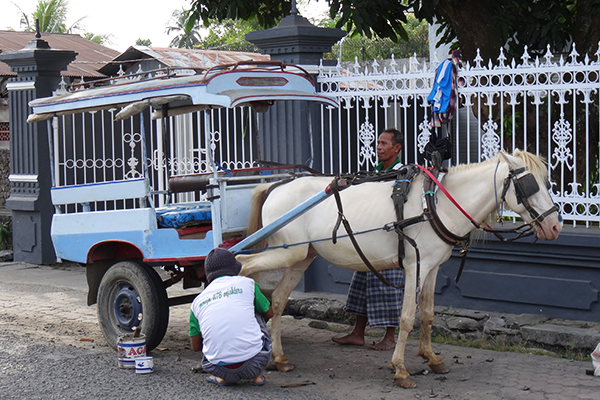 Changing horseshoes in the streets of Mataram 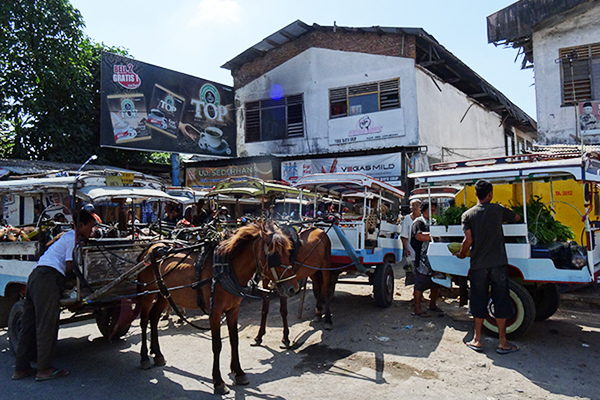 Just out of Mataram there are few nice activities you could do:

Just 10 kilometers southeast of Mataram you will find Taman Narmada, which means Narmada Park. Narmada Park was built back in 1727 commissioned by the former King of Bali Anak Agung Gede Ngurah Karang Asem. Pura Narmada is a park for leisure and to worship Hindu God Shiva. While walking around, discovering the park, you will come across a large swimming pool. This pool symbolizes Segara Anak, the crater lake at the nearby volcano Gunung Rinjani. You will also see a pond and a water source. The story goes that the water of the source brings eternal youth to dedicated pilgrims. Which we are not, so we did not put any effort in worshipping the holy water. We just hope we feel youthful the rest of our lives 🙂

The Pura Kalasa, a beautiful temple in the Taman Narmada, is still in use and is also the main stage for Balinese Pujawali festivals held annually to honor the god Batara who “hangs out” at the Gunung Rinjani. Tiny detail: the aquaduct was built by the Dutch. 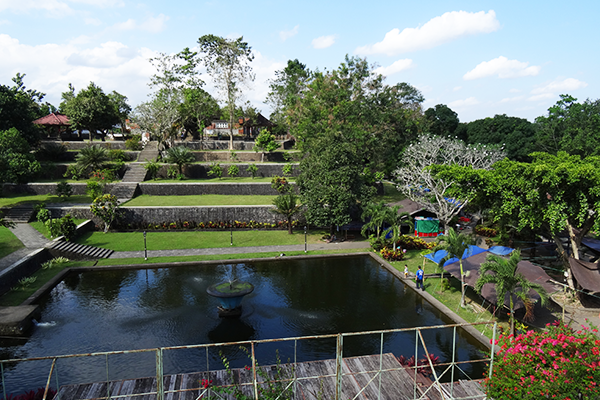 Pura Lingsar is a large temple compound just 6 kilometers northeast of Mataram. The temple complex was built in 1714 by Balinese Hindus, commissioned by former by King Anak Agung Ngurah. Pura Lingsar is beautifully located next to rice fields. Being the holiest location of Lombok, Pura Lingsar is one of the most important religious buildings of the Indonesian island. Unique these days is that the temple compound is not only a sacred place for Hindus. Next to the temple for Hindus, called Pura Gaduh, you will see a temple for local followers of the Wektu Telu religion. Both temples face West. The Wektu Telu religion is a regional version of the Islam.  What we love about Pura Lingsar is that followers of two different religions can peacefully pray together. Pura Lingsar is an important heritage and a symbol for unity of religions on Lombok. 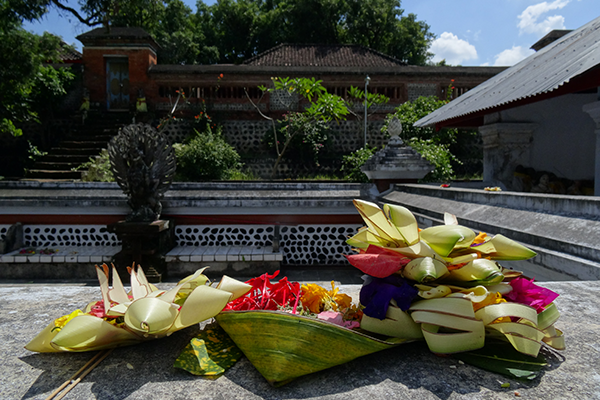 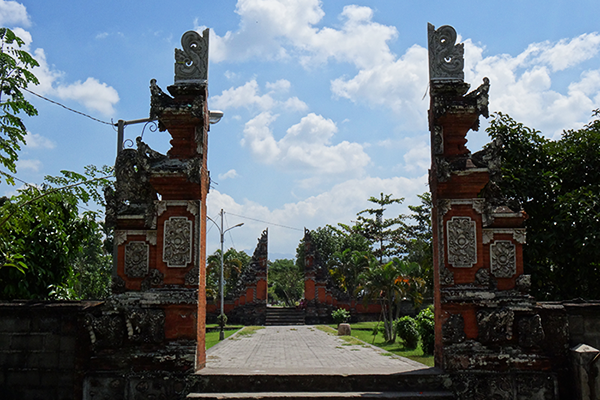 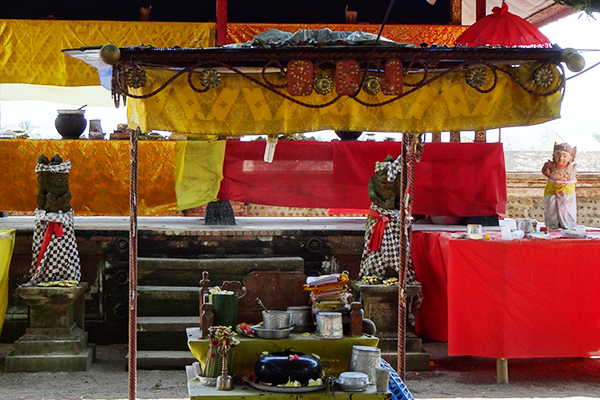 Wektu Telu is a local religion practiced by the indigenous people of Lombok, the Sasak. The Sasak consider themselves Muslims but do not necessarily obey all religious precepts of Orthodox Muslims. Wektu Telu followers opted for a mixture of different beliefs. The Islamic Wektu Telu temple is known for the pond covered with lilies. The pond is devoted to Lord Vishnu. Looking for good luck? Get some hard-boiled eggs to feed the holy eels. 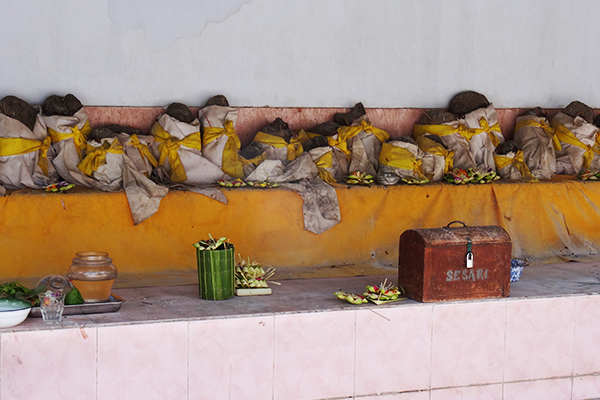 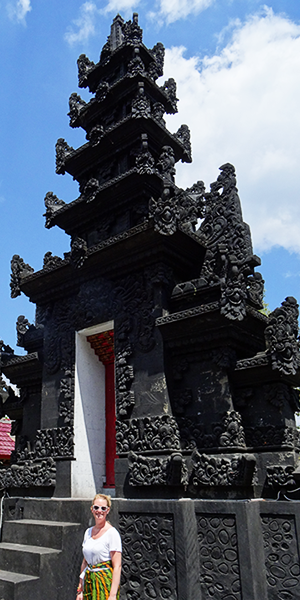 Another temple! Pura – which means temple – Suranadi is a beautiful compound of Hindu (Balinese) temples near Pura Lingsar. Suranadi can be split in “sura” and “nadi”. Sura means God and Nadi means River or Heaven in Javanese language. It is likely that you will first visit the largest part of Pura Suranadi. It exists of three temples and “Panca Tirta” which means five (panca) holy waters (tirta). Panca Tirta plays a major role in the many Hindu ceremonies. Something the monkey inhabitants really like: the flowers and little cakes that are ‘sacrificed’ to keep the Gods happy and satisfied are their favorite diner 🙂

Go there by bemo, the well known minibuses, or go with a local driver who can also tell you more about the temples and religion. Founded in the early 16th century by a Javanese priest, Pura Suranadi is the oldest and most holy Balinese temple on Lombok. The route to Pura Suranadi and Pura Lingsar is very scenic, especially when you are there in the “green” season. You get to see rice fields, fish pounds, lots of local fruits and vegetables plantations and authentic villages.

Please note that for all temples in Indonesia you will have to cover your shoulders and legs, so wear a t-shirt and bring a sarong. You should also bring a sash or pay a few Rupiah and borrow one at the temple complex.

During Dutch occupancy, the current road that divides Pura Suranadi into two parts, was built. If you would like to discover the “other” part of the temple complex, just cross the street and walk down the small path next to Suranadi Hotel. Built in the 1930s by a Dutch employee of the Dutch Indian Bank, it is one of the oldest hotels on Lombok. Suranadi Hotel was initially built as a holiday house and became a guest house for the Dutch after the Japanse entered the island in 1942. The local government now owns the house and turned it into a hotel. 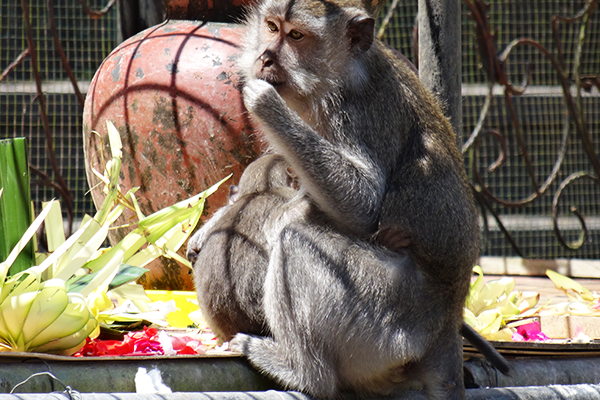 More to the center of Lombok, south of Mount Rinjani, you will find the village of Tetebatu. The small village of Tetebatu itself is not a must visit, but the countryside around Tetebatu is just perfect for a stop! The area is blessed with rich volcanic soil so covered in tobacco plantations, fruit orchards, rice fields and fields with cattle. The beautiful surroundings invite you for a walk along the sawahs (rice fields) with Mount Rinjani in your wake. If monkeys are your favorite animals, you could go on a 3 hour hike in monkey forest. Since monkeys tend to be unpredictable and not always friendly towards any human or animal being, we decided to leave monkey forest as it is. Another nice activity is the hike to one of the most popular sites in the area, Tetebatu waterfall. 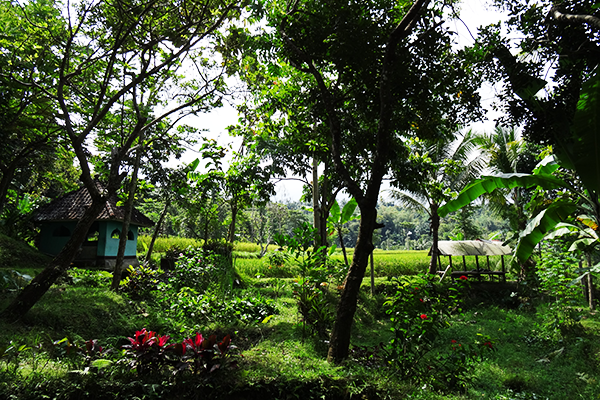 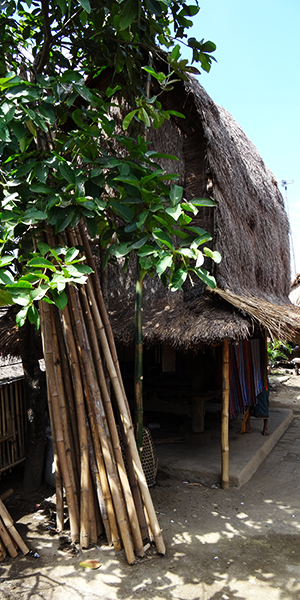 Located in District Pujut, with a distance of about 30 kilometers from Mataram, we drove by the traditional Sade village. You can’t miss it if you are on your way to Kuta. Sade’s Village is one of the tribe villages where the Sasak people live. The houses are traditionally built with walls of clay or cow feces and alang alang roofs. Alang alang, also known as cotton-wool grass, is a type of grass. A glance at the kitchen takes you back in time.

Sasak men make their living farming, women bring in their money with well known ikat weavings. Sade Village has developed into a tourism village, so the families now also sell souvenirs like bracelets.  Ikat, or ikkat, is a technique that is used to create motifs into textile.  Prior to dyeing and weaving the fabrics, the yarns are dyed. During this process, some parts of the yarns are bounded together or covered with a water-repellent substance, so that dye can not adhere on those places. Not the easiest process to describe, but great to admire the local Sadak women creating the colorful ikat fabrics.

Last but not least: Kuta! An obvious comparison to make, is starting about the horrible tourist city on Lomboks sister island – but let’s not to that! Everything is better in Kuta, Lombok 🙂 The beach is not packed, the green hills deserve their credits and there are just a few restaurants and hotels. 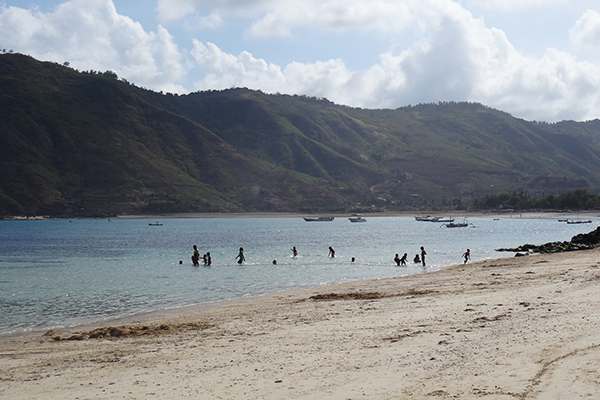