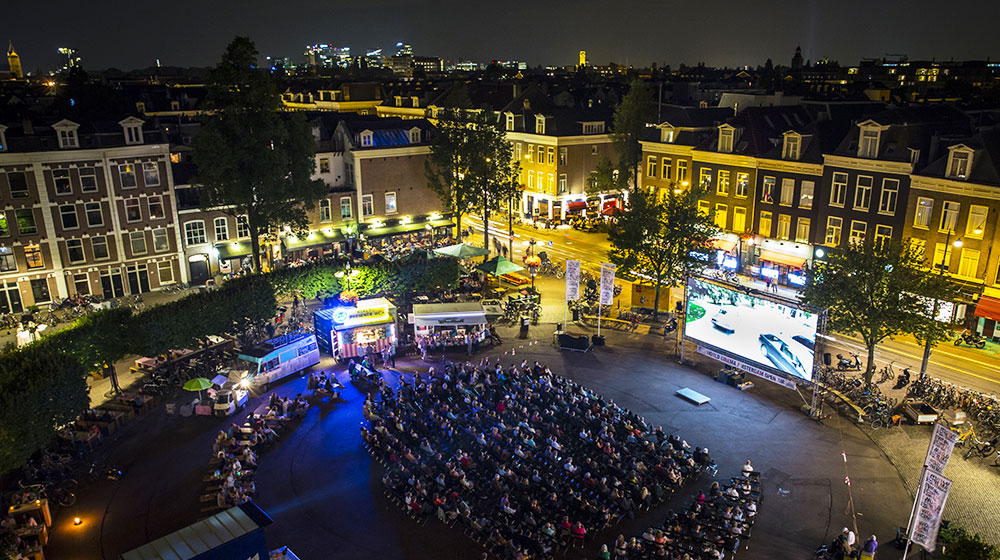 Films with a View at Pllek

Cross the Amstel river by boat for free, where Pllek’s open air cinema is waiting for you! Pllek is one of Amsterdam’s city beaches and the perfect spot for open-air cinema. Every Tuesday night, just after sunset, the open air cinema starts. In July this will be around 22:30, in August about 21:45. Visitors will get headphones because Pllek doesn’t use sound systems. It’s not possible to reserve your spot however it is recommended to reserve your headphones, just send an e-mail to Pllek.
Address: TT Neveritaweg 59

Buurtboerderij, meaning local farm, Ons Genoegen is part situated in Westerpark – a park in the Westerpark neighbourhood. Yes, we understand this can be confusing. The park and the neighbourhood have identical names! Buurtboerderij Ons Genoegen is the perfect spot for food lovers, culture seekers and mindfulness fans. You can participate in yoga classes, visit your new favourite music band, get married (very popular!), join a local party or go to the open air cinema. The open air cinema at Ons Genoegen occurs every Thursday starting the 21st of July.
Address: Spaarndammerdijk 319

This open-air movie theatre is lovely and it’s for free! Every Wednesday you can watch different movies on a huge 7 x 4 led screen. Dok Amsterdam movies are aired the whole day. During day time there are mostly kids movies, but hey: we are never to old to watch a good cartoon. We became a fan of the open air cinema Cult bij Dok when they showed The Big Lebowski in June. Do check the weather conditions on Cult bij Dok’s Facebook page, because movie Wednesday can be cancelled if weather gods are in a bad mood!
Address: Moermanskkade 71

This is an open air cinema with the perfect view of Amsterdam city! Rooftop Movie Nights are hosted on the Ramada’s Hotel rooftop terrace Floor 17. The open air cinema on Ramada’s rooftop starts at 21:45 – 22:00 and takes place on Fridays, Saturdays and Sundays from the end of July until the end of August.
Address: Staalmeesterlaan 410

Initiated by a group of friends and movie lovers, Pluk de Nacht is at Stenen Hoofd becomes more popular every year! This year is this Amsterdam Movie Festival organises its 16th edition from the 3rd of 13th of August. These guys select national and international movies, documentaries and animations themselves at different film festivals. The great thing about Pluk de Nacht is that you will be a pioneer because the movies have not been shown in the Dutch cinemas yet. Entrance is for free again, just be nice and support the festival and their volunteers by buying a beer! At Pluk the Nacht Festival, you don’t have to worry about food: there are three food trucks serving delicious food! All open air movie nights open with a short surprise movie and end with a great party, enjoy!
Address: Contactweg 150

One week after Pluk de Nacht, Amsterdams movie festival World Cinema Amsterdam starts. This year is World Cinema’s 7th edition in Amsterdam. With a special focus on Turkey, the movie festival shows the best movies from Latin America, Asia and Africa. Visitors can enjoy over 40 long and short movies. These 40 movies are to be seen in cinemas Rialto and De Balie and in two Amsterdams open-air cinemas: Marie Heinekenplein in De Pijp and in Vondelpark’s open air cinema/theatre.
Not in Amsterdam on one of the listed days but are you interested in attending an open air performance? Amsterdam’s Vondelpark hosts cultural evenings on Fridays, Saturdays and Sundays during the summer months.

Just in between the World Cinema Open Air evenings, Netflix and Chill will take place on saturday the 20th of August! Lots of food, campfire and beanbags! What else do you need for a Netflix festival? The new festival area Thuishaven in the Westpoort neighbourhood is where the first Netflix & Chill festival is held! Chilling in a hammock or hot tub, popcorn all over the place and you will be ready to have the best open air cinema experience! We have heard rumours about speed dating at Netflix & Chill, massages and silent disco’s and more! We are curious what the Netflix & Chill open air cinema will bring to Amsterdam. 5 days after announcing the event, over 52.000 people are interested and we hope Netflix & Chill becomes a recurring event!
Address: Contactweg 150

On the Rooftop Film Festival

Rooftop Film Festival is a four-day movie festival that collaborates with World Cinema Amsterdam. Held on a unique location with a spectacular view: a university’s rooftop located in the South of Amsterdam. Especially interesting for international visitors since this is the first fully English language edition, which means English intro movies, interviews and subtitles! An evening on the rooftop starts at 17:00 with drinks and a guest interview. Movies starts at about 20:15.
Address: VU/De Boelelaan 1105