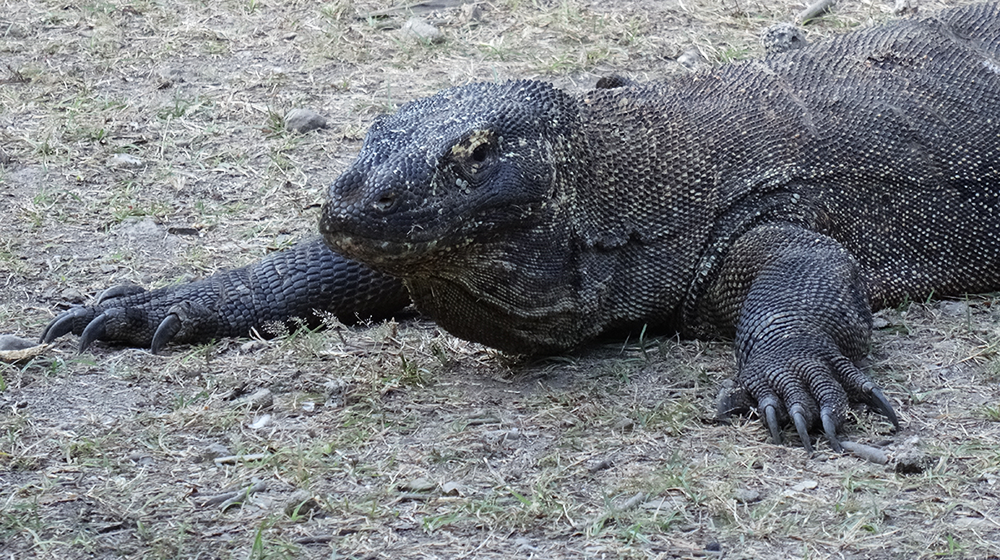 Jagged hills covered with a carpet of savannah with peculiar trees and tiny villages with houses on concrete blocks: Komodo and Rinca appear on our scope. Beautifully nestled between Flores and Sumbawa, the islands Komodo and Rinca are home to the prehistoric Komodo dragon! The islands are isolated and it took us a while to get there, but seeing these animals was a fantastic experience! The dragons seemed lazy – which they probably are as well – but they can be ruthless…

Komodo dragons are the largest living species of lizard, growing up to a maximum length of 3 metres and weighing up to about 70 kilograms. The world’s largest lizard is locally known as ora. With its size the Komodo dragon is the most impressive predator on Komodo and Rinca – we guess on Indonesia actually. With their sharp claws and powerful tail, the Komodo dragons look like their mythical relative: the dragon. Luckily Komodo dragons don’t spit fire 🙂 However, when they get excited, they move their typical tongue dangerously back and forth, making threatening hissing noises. If the dragon will attack… we don’t even want to think about it! The dragons were kept on a safe distance by local ‘rangers’ and obviously we had our own rescue plan 🙂 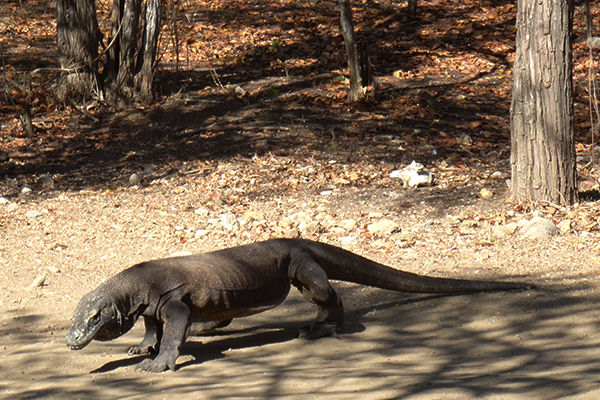 The Komodo dragons were only discovered and described by biologists in 1910. Since then a lot of research has been done on these unique species. Estimates tell us that there are about 1.000 Komodo dragons living on the Indonesian islands. The Komodo dragons have no real predators (other than humans really) which hopefully ensures that many generations after us, will also have the chance to meet with them.

Just as most other dragons and reptiles, Komodo dragons prefer to sleep at night. They sleep on tree roots or rock crevices. As soon as the sun rises, their blood warms up and they start the day! The dragons we saw looked pretty lazy in the afternoon, but in the morning and late afternoon, they become more vibrant and start to look for food.  We were told that the Komodo dragons can even climb up a tree with their powerful claws. After hearing this, we were not sure if the concrete blocks where the local houses stand on, ensure safety. Hmmm, there goes our rescue plan… 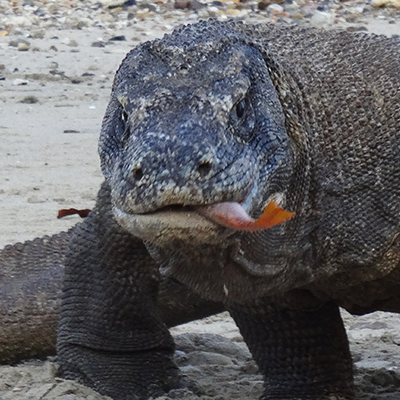 When it comes to food, Komodo dragons are not picky at all! Komodo dragons hunt on their own and prefer a meal that consists of other large animals, like wild boar, deer or buffalo. When we arrived at Rinca, we notice a few deer sleeping at the beach. We wondered for how long… We also saw quite a few monkey’s, but we considered them to be too fast for the huge lizards. Despite their enormous length of 3 metres, the animals are flexible and quick hunters. However they are not long distance performers, so the Komodo dragons hunt from ambush. When an eatable object passes, it jumps out and pushes it prey to the ground with its claws and jaws. With their strong claws the dragons can pull of large pieces of meat: ready to be served! Young Komodo dragons also hunt for small mammals, birds and insects. Komodo dragons live in solidarity. When the Komodo dragons run into each other at a carcass, there is a strict hierarchy: the one who is the boss, can start and decides!

Propagation of the Komodo dragon is usually around late June or July. Male dragons defend their territory with possible violent conflicts. In the animal kingdom there is an important rule: the larger the territory, the more a the female is interested. Only five weeks after mating, the female digs a hole in the warm and moist soil to lay her eggs. The number of eggs increases with age and the size of the female. On average a Komodo female lays around a dozen of eggs and covers the clutch with earth: let the sun and the heat do its work. Approximately eight months later, the young dragons start crawling to the surface. For young lizards it is a dangerous time: they are barely 20 cm long, and therefore easy prey for predators like snakes, birds or larger species. We saw a tiny Komodo dragon on the island of Komodo – it was difficult to spot (and to photograph!) but the crackling grass betrayed his presence! The baby dragons who survive, grow fast and reach the length of one meter after three years. That means they become too large for enemies. After five years, the Komodo dragons are about two meters long and they become stronger.

The islands of Rinca and Komodo are ideally suited to behold the dragons. The islands are fully adapted to receive dragon worshipers. Rangers keep an eye on you, but some old papers in a small shed with numbers of missing travelers are arousing some suspicion. Well, never mind! We decided to stay together and keep a safe distance!

All in all a great experience! Definitely worth the trip. Interested in a Sunda islands boattrip yourself? Check out our article or book directly at local travel agencies Kencana or Perama  Tours.