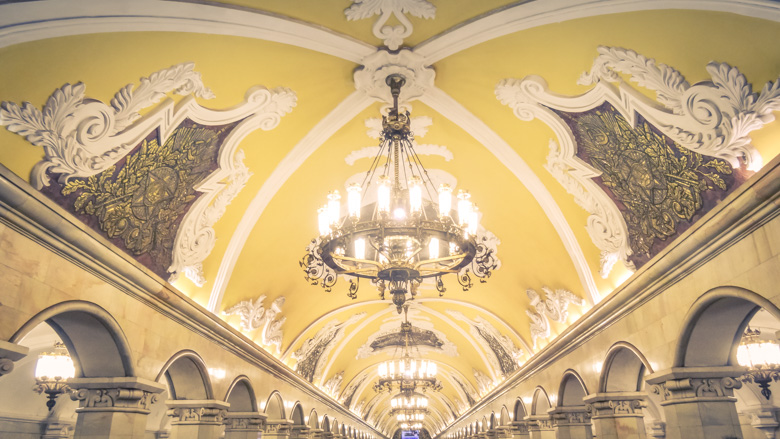 Visiting Moscow? Get yourself a metro card and explore Moscow’s beautiful metro stations. Moscow’s world-famous metro system is efficient and a great way to get from A to B. But there is more to it; Soviet mosaic decorations, exuberant halls with chandeliers, colourful paintings and immense statues. Moscow’s metro is an attraction itself, so take half a day and dive into Moscow’s underground!

The best thing to do is to get on the brown circle (number 5) line since the most beautiful metro stations are situated on this line. The only exception is the metro stop Mayakovskaya one the green line (number 2). My suggestion is to get a map, mark these metro stops on there and hop on the metro. It helps to get an English > Russian map to better understand the names of the stops. At some of the metro stops, the microphone voice speaks Russian and English so it’s not difficult at all.

Another thing we found out, is that it’s worth taking the escalator and explore the other corridors to discover how beautiful the full station is.

These are my favourite metro stations in Moscow, in order of my personal preference:

The metro station of Mayakovskaya looks like a ballroom! Wide arches, huge domes with lamps and mosaic works make your exit of the metro overwhelming. Look up and you will see the many colourful mosaics with typical Soviet pictures. Mayakovskaya is my personal favourite and is the only stop not on the brown line but on the green line. 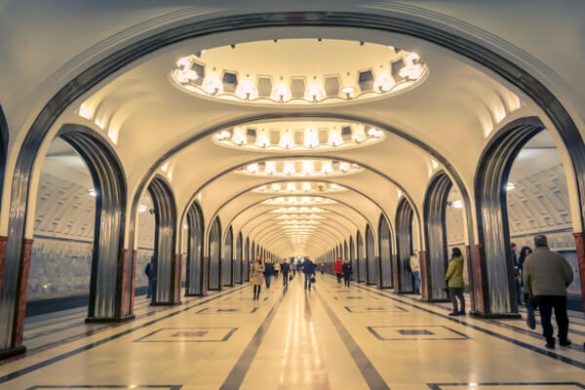 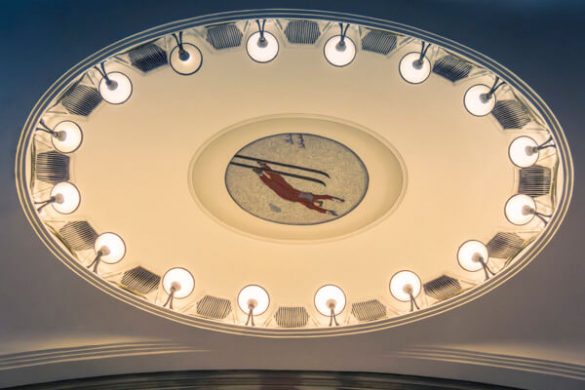 Komsomolskaya metro station is famous for its yellow ceiling. An average museum is nothing compared to this stop. Splendour all over the place, black and gold, mosaic – again – and enormous chandeliers that made my lamp at home look like a toy. 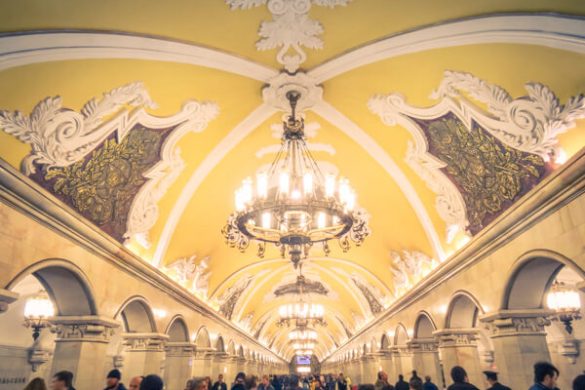 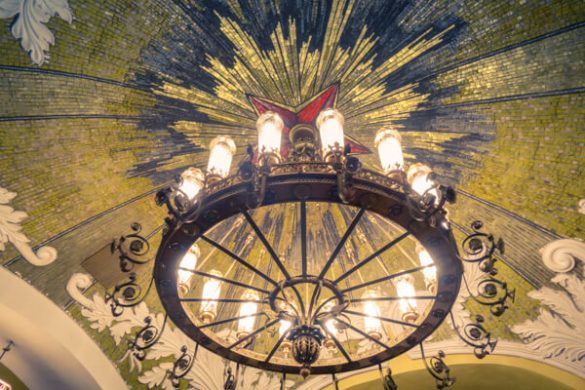 The pillars in the main hall of Novoslobodskaya metro station have the most colourful stained glass decorations. The golden arches and the golden mosaic with a naked lady holding a baby in front of the Soviet hammer and sickle, make the drama complete. 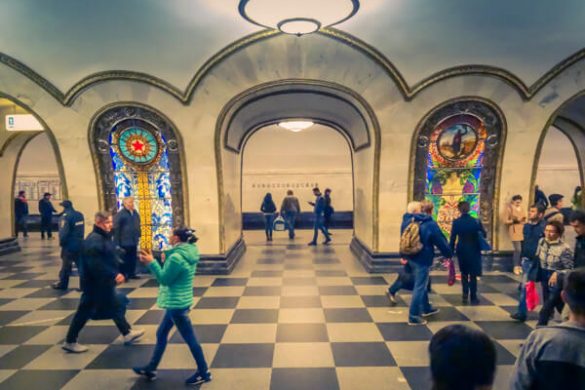 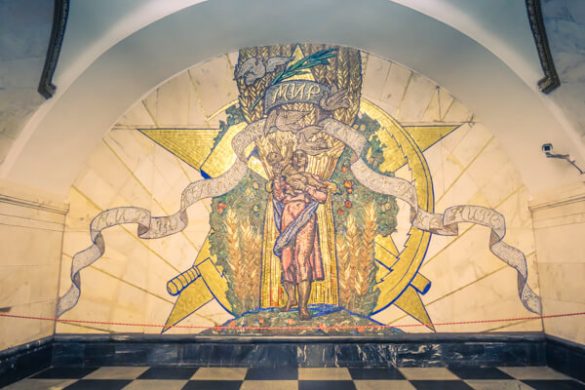 The beautiful chandeliers and the lines in the ceiling, make Prospekt Mira an architectural masterpiece. 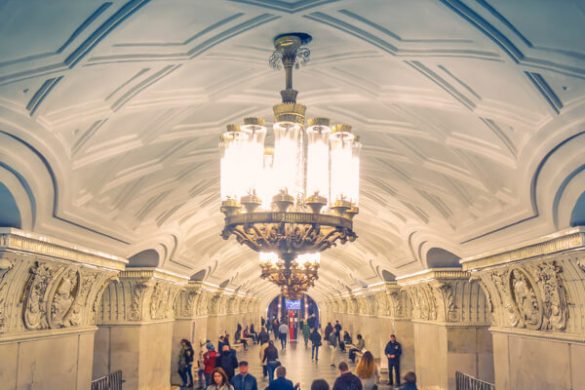 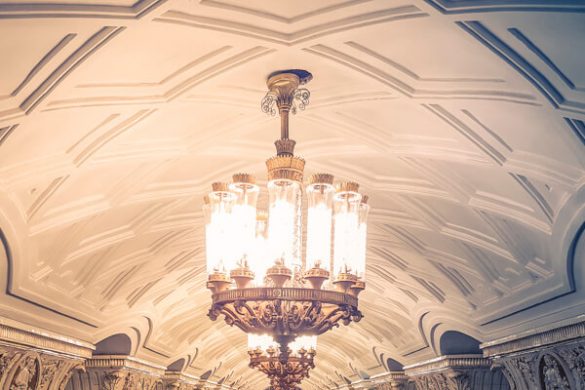 Prestigious arches, octagonal shapes of Socialistic Soviet Republic mosaics. The eyecatcher of Belorusskaya metro station, however, is the enormous statue of three men with long coats, holding guns and a flag. 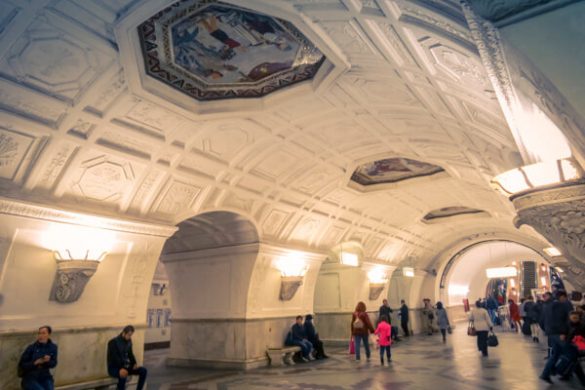 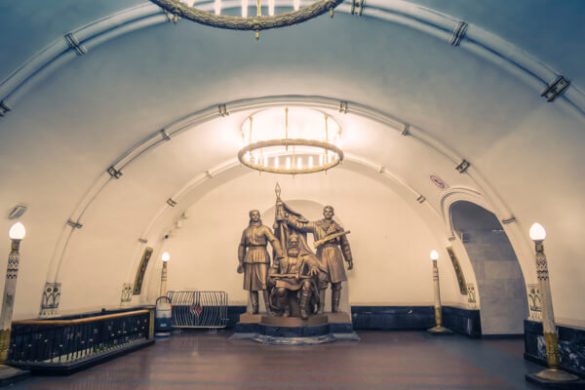 The metro station of Kiyevskaya is a bit more romantic than Belorusskaya and Prospect Mira. Beautiful paintings with classical decorations. 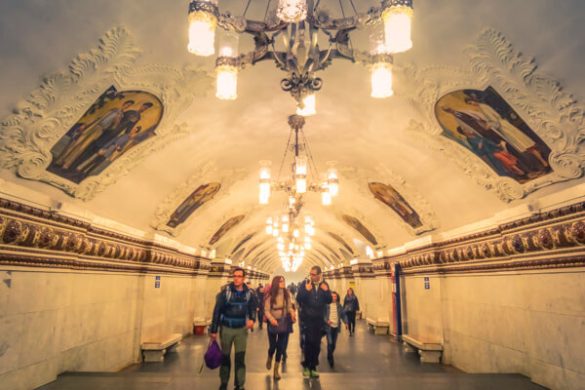 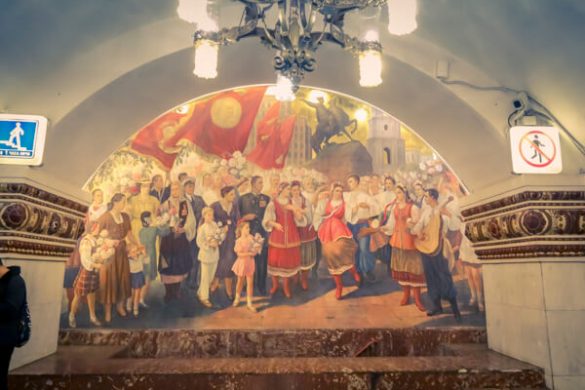 At the main hall Taganskaya metro station you will find triangle light blue and white decorations that are an ode to various Russians that – I assume – are important for Russian history and victory. There is no need to explore others halls of Taganskaya, this is it. 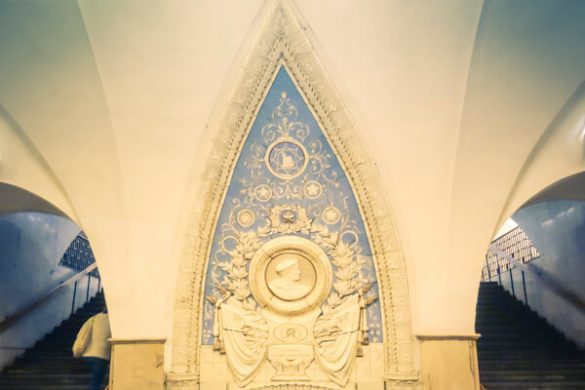 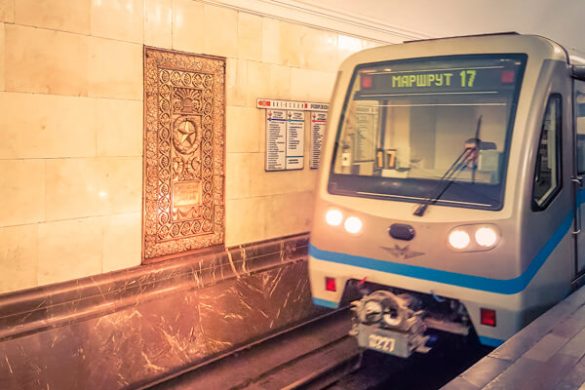 Another and most definitely the less beautiful outrageous huge golden mosaic covers one of the walls of Paveletskaya. I would recommend taking the escalator to the exit upstairs to admire the turquoise dome and a painting of the St Basil’s Cathedral in a wooden frame. 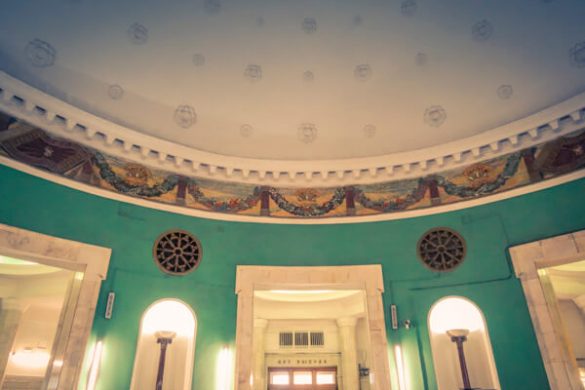 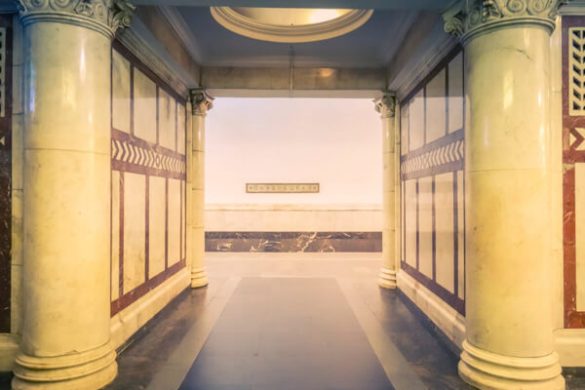 Travelling with Moscow’s metro is inexpensive. You can have a lot of joy for just a few Rubbles.

Like to know about Moscow, travelling in Russia or the Transsiberian Train journey? Read my other articles about Russia.

Hunting For The Best Coffee In Irkutsk

Wow! It is beautiful. I am still dreaming of Moscow one day.

It’s absolutely beautiful! Moscow is a great city trip destination and really surprised me in many ways.

My partner and I did a self guided Moscow Metro tour when we were there 2 years ago. So many breathtaking platforms…I highly recommend it! Most of my favorites were along the Brown 5 line, as well. I also loved Mayakovskaya, Arbatskaya, Aleksandrovski Sad and Ploshchad Revolyutsii. We’re heading back in a few weeks and plan to do Metro Tour-Part 2. We hope to see the #5 stations we missed before, as well as explore some of the Dark Blue #3 (Park Pobedy and Slavyansky Bul’var, for sure), Yellow #8 and Olive #10 platforms.

That’s exciting Julia! Curious to see your Metro Tour-Part 2 experience and the stations you discovered.