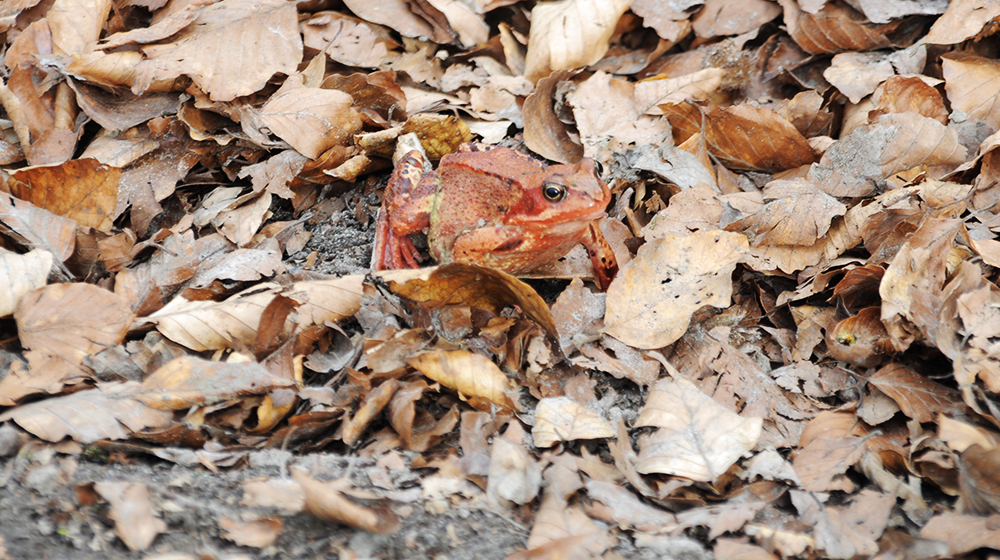 It took some research last week to figure out our new destination: in our minds we went to Malaga for some time on the beach, to Puglia to discover the trulli and to the Scandinavian capitals. In the end we decided to take the car and drive on a roadtrip to Germany. We ended up on an island we did not really know existed: the island of Ruegen or in German: Rügen.

Rügen is Germany’s largest island and exists of one main island, several smaller islands and some peninsula’s. We spent a few days on the main island and really enjoyed the nature, the German hospitality and the relaxing atmosphere. The island of Rügen is about 900 km² and is part of the Mecklenburg Vorpommern province. The only gateway by road is the 96, crossing the modern Stralsund bridge. If you like birds, make sure you pay attention to the green fields because we saw lots of cranes! 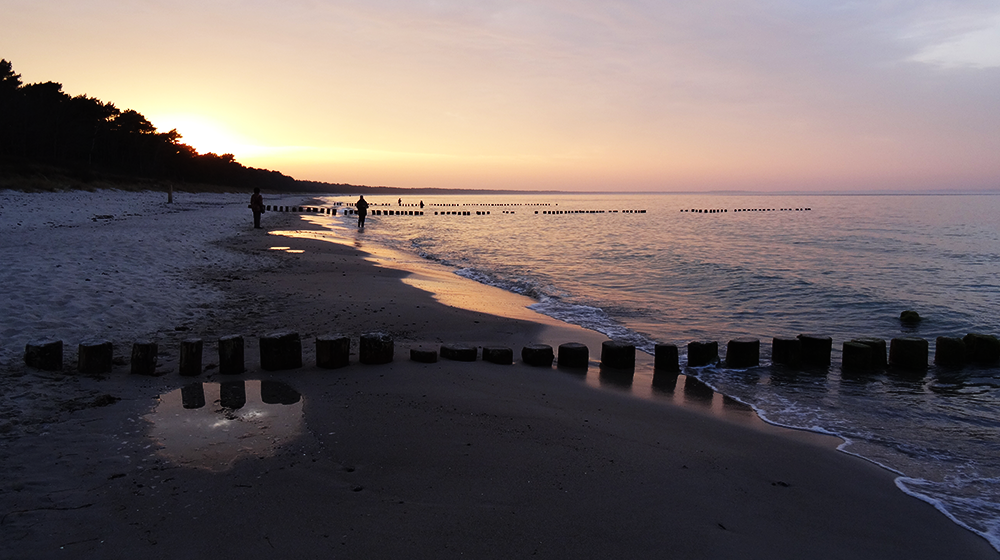 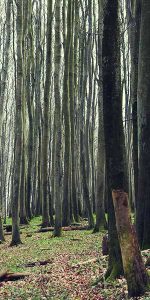 The island of Rügen is known for its chalk cliffs, magical lakes and beautiful views of the Baltic sea coast. Our first stop was Jasmund National Park. Jasmund was founded in 1990 and is one of the 2.200 national parks in the world, so you can almost say its the German equivalent of Yellowstone. In Jasmund National Park there are a lot of hikes you can enjoy. We parked the car at Hagen Parkplatz and walked to the Visitor Centre of the National Park. Near the Visitor Centre, you can take a long wooden stairway down to the beach (ignore the fact that you will have to walk back). It’s a good exercise and the only way to enjoy a walk on the beach. You will get a good view of the mysterious chalk cliffs, the relatively small coastline and the impressive ancient beech forests. The walk we did from the parking in Hagen to the Visitor Centre was about 2,5 – 3 kilometres and a very easy walk in mainly forest. We advise to take your time and keep your eyes and ears open: we saw a lot of animals – try to count the number of robins :). Look out for red frogs and don’t leave without seeing a few deer. Please note that you can also enjoy apfelstrudel mit sahne and ofcourse a German lager in the café near the Visitor Centre!
Entrance fee: € 8,50

Near the village of Prora, just on the L293 you will find ‘Naturerbe Zentrum Rügen”, which is part of the non profit organization DBU Natural Heritage. With its open landscapes, wetland and woodlands, Prora is unique for its natural diversity. In this park you can experience a tree top walk in the forest and enjoy the stunning of view the island and the Baltic Sea from the viewing tower ‘eyrie’. From a height of 82 metres above sea lea level, the 40 metres high viewing tower offers you views of the Sea and the bays but also – if facing the north east – of KdF Seebad. The brochures tell us that we have the chance to observe the majestic white-tailed sea eagle native to the island but I guess you understand we did not spot an eagle or any special species bird at all really. However, the 1,25 kilometre walk between the old beech trees and the view are worth paying a visit to the park!
Entrance fee: € 10,-

KdF-Seaside with a planned 4,5 km length, was a resort complex that was built and almost completed on behalf of the NS-Gemeinschaft “Kraft durch Freude” (Strength Through Joy) between 1936 and 1939. These seaside resorts were meant to provide affordable holidays for the German working class. As part of the Third Reich, the plan was to build five of these huge seaside complexes. The only construction project that ever started, was this project on the east coast of the Baltic Sea coast on Rügen. The architect Clemens Klotz planned to build 8 enormous buildings (‘Bettenhäuser) along the shoreline, divided in two complexes: North and South. Each complex would exist of four blocks of ten housing units, providing sea view rooms for 20.000 people. The project included plans for community buildings, swimming pools, restaurants, cinemas and sport halls. The plan was to finish the park in 1941, but the complex was never finished. However during 1944-45 refugees from bombed cities as Hamburg lived in the buildings and during the war the complex was used for military trainings and as military hospital. From the 1950’s to 1991 the buildings were used for training troops by the East German Army, some buildings were demolished and renovated again, some buildings have been stripped of usable materials. Today, there are three blocks located south of the planned, unfinished fairground and two in the north with ruins of two other blocks close by. The complex is  the largest architectural legacy of the Nazi period besides the Nazi Party Rally Grounds in Nuremberg, and is now a listed monument. Take your time to walk around, immerse yourself in the history and try to imagine how this immense complex would have been. A bizarre sensation. 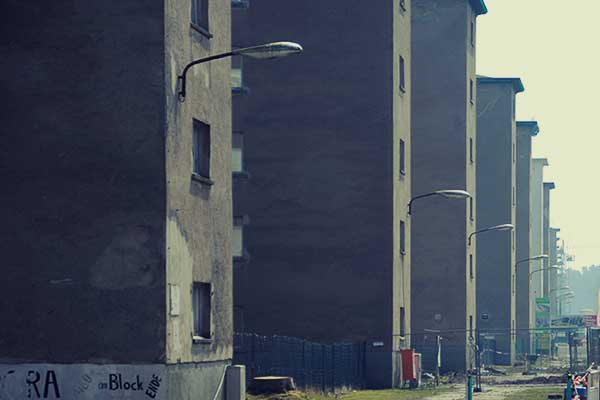 Sellin is a pretty village on the coast and is known for its beautiful pier with restaurant. The beach is very pretty, almost white and even on a cold day in April, the sand invites you for a stroll. Sellin is a popular holiday village, just as the rest of Rügen island actually. We noticed that the houses and shops are beautifully painted and well preserved. With its unique architectural style, it looks like living in a cottage where the American porches meet the Scandinavian country style. 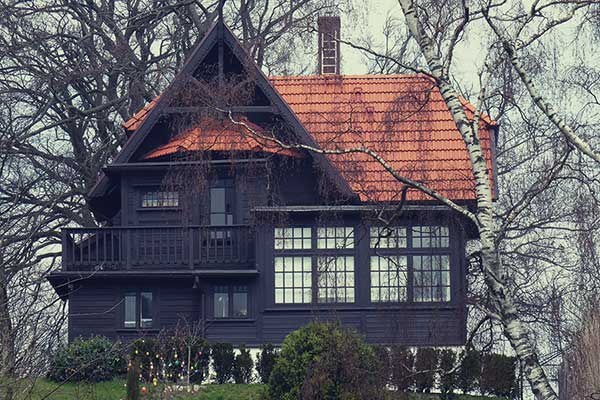 Cottage were we would love to live! 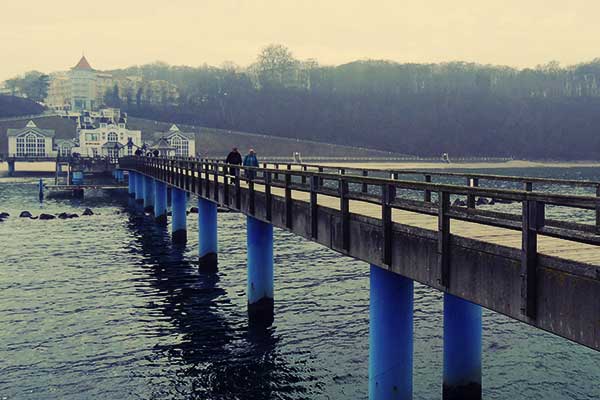 The well known pier in Sellin.

After spending a few days on the island of Rügen, we can conclude that the island is a beautiful place for a short weekend or midweek. There are plenty things to do. If you like nature, cycling and wellness: Rügen is your island! For us a few days  was enough, but that’s because we love the charm of a lively city: Let’s go to Berlin!